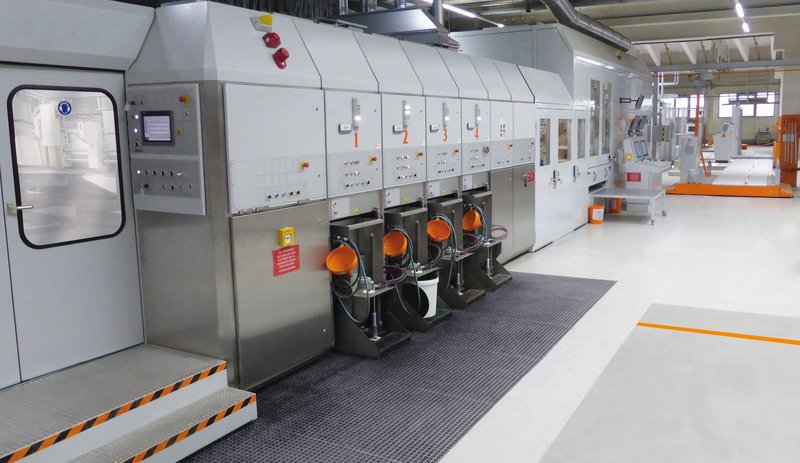 For RRK Wellpappenfabrik GmbH & Co. KG in Bottrop, which belongs to the Panther Group, the year 2021 not only marked the 45th anniversary of its existence. Also, investments were made in the anniversary year and in September of this year another, new rotary die cutter for high-quality packaging refined using flexographic printing (HQPP) was put into operation. The new machine impresses with its working width of 2,800 mm, high production speed, fully automated peripherals and a large number of quality-determining additional facilities.

Founded in 1976, the company has grown in every respect over the past five years. Continuous investments in state-of-the-art plant engineering and building technology as well as logistics, which have amounted to more than 20 million euros since 2016, have contributed to this.

The rotary die cutter, which has recently put into operation, has among other things, four inking units with IR dryers, print image monitoring including ejection system and packing robots. Complete camera monitoring of the entire system, optimized noise protection measures and consistent design under lean management and 5S methods create new, high modern workplaces for the Panther Team at the line. The decision in favor of the machine was made against the background of increasing customer requirements for quality of a wide variety of corrugated board packaging: Thanks to the latest process technology and quality monitoring, higher production speeds and the leaner workflow, the RRK Wellpappenfabrik is increasing its capacities and is also gaining more flexibility with a view to customer requirements. Extensive peripheral work has been carried out in the Panther Plant in Bottrop since spring to ensure the optimal use of the machine’s characteristics. In order to optimize the long design of the machine, the infeed and outfeed were partly movable and positioned next to the line to optimize space. In-house adjustments to the building construction including a creative solution for transporting the punching waste and an extension for the storage of printing plates and punching instruments complete the overall concept.

The new machine has been producing printed and die-cut packaging since the beginning of September, which will be followed by millions of square meters of sophisticated corrugated board with the expanded capacities over the next few years.

Two notching devices in one: mcut|notch-duo from Marbach