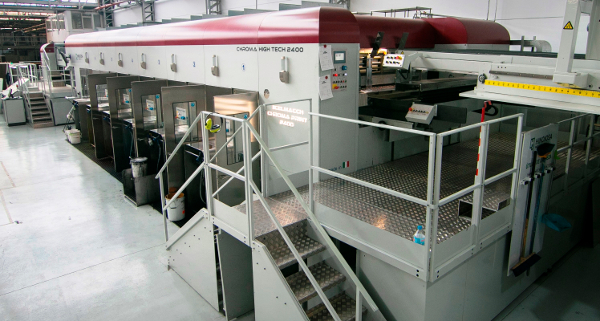 Rafael Hinojosa SA, one of the largest private industrial groups producing boxes in Spain, founded in 1947. Hinojosa’s Group is a leading manufacturer of corrugated cardboard, with multiple locations throughout the country.

The Group’s headquarters are located in Xàtiva, just in south of Valencia, eastern of Spain. Other plants are located in Pacs del Penedès (Barcelona), L’Olleria (Valencia), Dolores (Alicante), Alovera (Guadalajara) and La Rambla (Córdoba). The family also runs the only company in Spain that produces corrugated plastic packaging. Celmacch and Hinojosa are very proud of their excellent cooperation. In fact, three Celmacch flexographic printers are present at the Hinojosa factories: first one was installed in Cipasi for the production of polypropylene board, second one – a Chroma High Tech 2100, 6 colors – was installed in 2017 in Envases Rambleños close to Córdoba and third one was installed at the Xàtiva’s headquarters between the end of 2017 and January 2018.

Hinojosa has a well-established reputation for both digital and flexography printing and is considered one of the largest European producers of digitally printed packaging. Having been one of the first plants in the world to install a Barberan single pass digital press more than 5 years ago. In 2017 Hinojosa installed the world’s first corrugated cardboard packaging machine EFI ™ Nozomi C18000 LED- with a high speed single pass ink.

The Company has installed a new Chroma High Tech 2400, 6 colours off line with vacuum belts transport  and non-stop stacker. This line has been developed to achieve the highest quality levels for post-print flexographic printing. The structure of the machine is HBL, to allow quick set up during the production while the machine is operating.

The lead edge feeder on wheels driven by Siemens direct motors ensures high precision and low maintenance over the long term. Each printing unit is equipped with a carbon fibre chamber system with automatic washing system and peristaltic pump.

Thanks to the anilox change system, with up to 3 anilox rolls for printing unit, it is possible to choose between different types of roll with different specifications, ranging from standard anilox to anilox for high definition works. The use of Siemens electronics with direct motors provides maximum accuracy and reliability in the long term. The supply is completed by the choice of Simec anilox cylinders with different lines to be able to range from standard jobs to high-definition coated jobs, in fact, it takes about 3 minutes to change the anilox cylinder. Precision printing allows Hinojosa to establish itself in the field of high definition thanks to the most advanced printing technology. The machine offers a maximum speed of 10,000 sheets at the time, and the automatisms guarantee high productivity as well as shorter work change times.

New platen cleaner from Marbach on the road to success