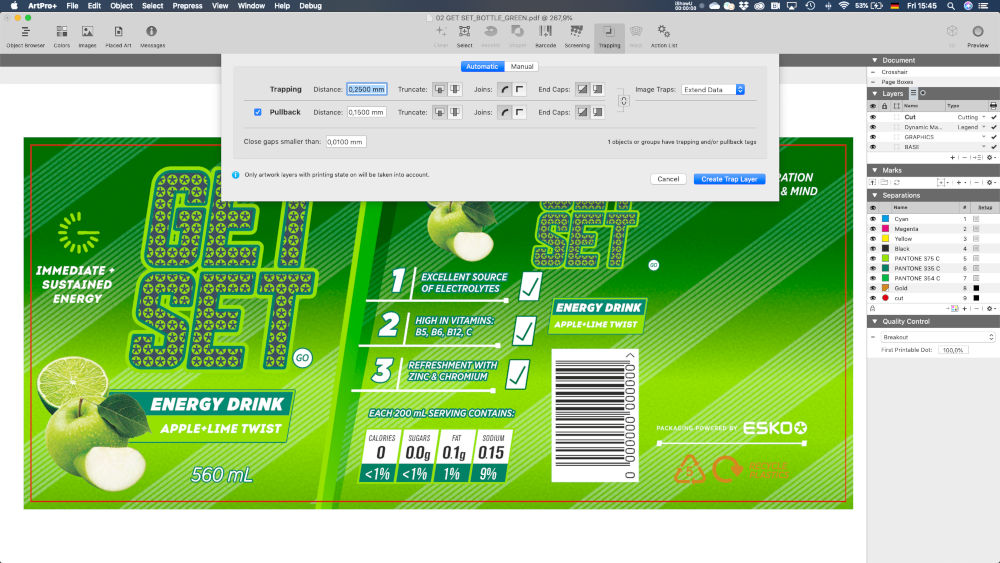 Esko has scooped a 2020 InterTech Technology Award from PRINTING United Alliance, after developing a new prepress tool to make trapping jobs up to 70 per cent faster and unerringly accurate.

As a leading developer of integrated software solutions, Esko has been investing in not just R&D but also customer research to further innovate trapping technology, looking to deliver to the industry better tools to achieve the goal of 100 per cent right first time trapping.

“We are deeply honored to receive this recognition for the Esko Trapper, which has been received so well by our customers and the industry,” said Frank Woltering, Product Manager Graphic Editing. “PRINTING United Alliance is committed to advancing the graphic arts industry so to be recognized for our efforts in improving trapping to boost accuracy, productivity and efficiency, makes our job worthwhile.

“Achieving a consistent, aesthetic trapping result with the correct distance, direction or color you give to a trap, and to make it as least visible as possible, is difficult even for expert prepress operators,” said Frank. “If a job is trapped by 10 different people, then there will be 10 different results. The Esko Trapper is a new trapping product that will help get the job done not only in less time but more importantly also in a much safer way, closing misregister gaps and accommodating individual exceptions to ensure all colleagues in a team can and do achieve exactly the same trap result, delivering a right first time trap file to press.”

Frank explained that trapping carried out manually can be a very complex and time-consuming task requiring skilled operators, with around 15% of prepress time going into trapping. “While existing instant trapper tools can work on strokes, images and anything within the design, it is still a manual process,” he said. “Not only does this mean the process can take some time, but it also involves risk of operator error, nor can it be used in a workflow, making it difficult to change a global trap setting,” he said. “While currently available trappers can apply standards – rules that can be configured to achieve the same trapping result using a workflow – they are not very flexible on the aesthetic, meaning operators still have to go in and make exceptions.

“This is why Esko has developed its brand-new trapper – using an object-based approach combined with a color-based approach. Esko created a new algorithm that can not only judge a trap based on the color situation, but also based on objects,” said Frank. “Often, modern packaging designs are covered in image data that is masked out by using an alpha channel. These images need to be individually prepared by the prepress professional to accomplish a good trap. But the Esko trapper is taking over this task by artificially adding image data to fill traps into the background. Combining these two improvements gives us a much better first time right when trapping the job automatically.”

James Workman, vice president of technology and research for PRINTING United Alliance, the largest printing and graphic arts association in the United States, commented that InterTechTM Technology Award judges were impressed with the uniqueness of being able to set exceptions for trapping objects and have that stay with the object even if the design is altered. Some of the judges were surprised, he said, that this level of automation was possible given the complexities of trapping designs.

“This is not just an improved process of aesthetic trapping, it is designed specifically to maintain exceptions across files,” added Frank Woltering. “This is the very first time this unique functionality has been achieved and is protected across numerous patents.”

Following an initial phase of pre-release beta testing, the new Esko Trapper was first made available commercially to customers in 2020, within Esko Automation Engine, DeskPack and ArtPro+ 20.0. Supporting the Esko submission, one of the company’s largest customers detailed how the new innovation led to a 70% reduction in the time spent on trapping. “This is the average time saving reported across users, leading to increased productivity, greater throughput and increased efficiency,” said Frank. “The improved accuracy also minimizes wastage through errors, in terms of both materials and time.”

James Workman commended Esko for the award. “The tech-savvy judges have plenty of industry experience and aren’t easily convinced a technology is award-worthy, but were impressed by the innovativeness of Esko Trapper.”

The InterTech Technology Awards program has been operating since 1978 and honors the development of innovative technologies predicated to have a major impact on the graphic communications and related industries.