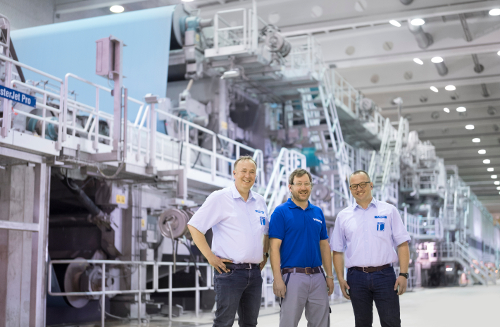 In Schwedt, Voith has converted the LEIPA Group’s PM 5 from a newsprint to a packaging paper machine. On 19 April 2018, the acceptance and handover of the machine of the Schwedt PM 5 project was signed early at LEIPA Georg Leinfelder GmbH, with effect on 13 April. As a result, the Voith team on site managed to bring the entire machine, consisting of a BlueLine OCC stock preparation line, DIP stock preparation line and XcelLine paper machine up to handover quality just 19 days after ‘stock on wire’.

Perfectly matched components and an extensive automation system including OnQ quality control system make the machine a new benchmark in the industry. LEIPA can produce approximately 450,000 metric tons of white top testliner (WTTL) on the machine and is therefore the market leader in this segment. After taking over the UPM mill in Schwedt, the new owner, the LEIPA Group, decided to extensively rebuild the existing PM 11. Under the management of Voith, the conversion of the newsprint paper machine to a machine for the production of white top testliner (WTTL) began in October 2017. LEIPA invested over 160 million euros in the plant. Now known as PM 5, the machine is a new point of reference for packaging paper. Just a few machines worldwide surpass its 9,200-millimeter wire width. It also takes the top spot with its production speed of 1,200 meters per minute. LEIPA plans to produce 1,180 to 1,400 metric tons of white top testliner per day with the best surface properties and basis weights of 100 to 140 grams per square meter. LEIPA wants to manufacture a total of 450,000 metric tons of paper every year and thus expand its market position further.

New platen cleaner from Marbach on the road to success