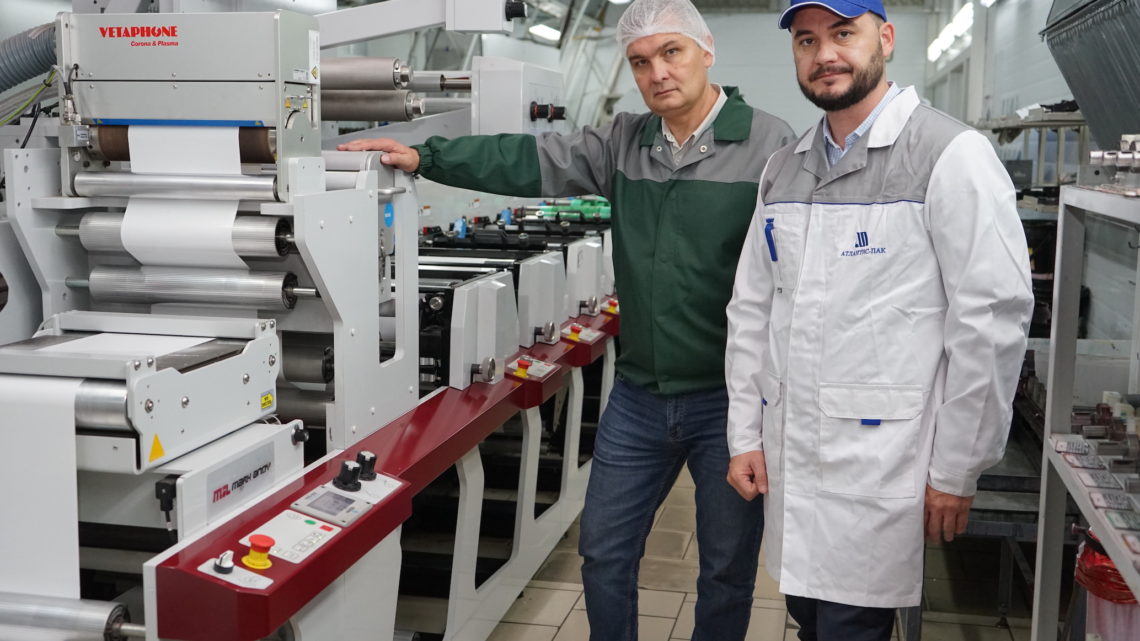 Award-winning Atlantis-Pak, one of the world’s largest manufacturers of sausage casings, has installed a Mark Andy Performance Series P7 flexo press in its label printing department in Rostov-on-Don in southern Russia.  The new Mark Andy, which joins three European manufactured presses, already accounts for 40% of total label production at the plant.

To understand the significance of this installation one needs to look at the background to Atlantis-Pak.  Established in 1993 as the first company in Russia to manufacture plastic casings, the company now employs 2,500 people, sells to more than 90 countries worldwide, and occupies a production site of 19 hectares, which is the equivalent of around 26 full-size soccer pitches!  Its list of production technology includes 28 extrusion lines, 44 shirring machines, 36 printing presses and 13 bag-making machines – all these are in addition to its label production department, which was opened in 2000.

Principle markets for Atlantis-Pak are the meat processing and cheese manufacturing companies that use plastic casings and heat-shrink vacuum packs, and the company’s products are some of the most innovative and award-winning in the industry.  Among the techniques it has been responsible for pioneering are permeable plastic casings, easy-peel casings, cook-in pouches and heat-sealable films for barrier casings.  The company is definitely a heavyweight player in this sector of the food packaging industry!

It was the change in legislation with regard to printing on sleeves back at the turn of the century that prompted Atlantis-Pak to look into label printing and initially invest in a used Arsoma flexo press.  As demand grew a second used Aroma was added and then in 2003 a new Gallus – all were EM 280 models.  But it later became clear that narrow web flexo technology had moved on and Atlantis-Pak was unable to compete on an equal footing with its competitors which were using more modern presses.

In 2016 the search began for a new flexo press, and after print trials at two leading European manufacturers, as well as at Mark Andy’s facility in Warsaw, Poland, the decision was made to buy a P7.  The Head of Sales Management Department for Label Production, Yuriy Perepletchikov explained: “There was no question after the print trials that the P7 was best suited to our work.  Its modern design makes it very ergonomic for the operators and the short web path reduces the amount of substrate waste during changeovers.”  Following visits to existing Mark Andy users and open discussions with them about operational issues, the order was placed, and the press delivered in 2018.

Specification of the 13” (330mm) Mark Andy P7 includes 10 UV-flexo units, a screen print unit, turn bar and cold foil capability.  “We felt that the Mark Andy made better use of servo drive technology than the other two presses we trialled.  It ran faster with better quality across the range of paper and film substrates we use here, and we like the opportunity it gives us to add value,” he said.  Atlantis-Pak was also impressed with the ease and speed with which it was installed and commissioned, and since going into commercial production the P7 has proved ultra-reliable on 24/7 operation.  This is partly down to the strategy the company has for planned maintenance on all its machines and is evident everywhere in the giant production plant.

A typical job on the new Mark Andy is 3000 – 5000 linear metres.  Many are nine colours with cold foil and two varnishes, and the split between paper and film is approximately 50:50, though much of the paper is thermal for use with meat products.  According to Perepletchikov the market is very competitive, so the flexible capacity and high productivity of the P7 is essential.  “It accounts for almost half of our total label output now and produces superior quality work, so we shall be adding another P7 to replace two of our older presses soon,” he said, which will keep VIP Systems, Mark Andy’s distributor in Russia busy.

Atlantis-Pak is currently in the process of adopting LEAN manufacturing, which with its large and complex production capacity is essential for maximising productivity.  In addition to the site at Rostov-on-Don, the company also has a facility for extruding, printing, shirring and bag making in the Czech republic, and intends to develop this to increase its sales in the markets of the EU, which will avoid any potential tariff issues with Russia.  It also intends to continue its innovative work with substrates and is developing multi-layer films with high barrier properties for food packaging.  Today’s packaging demands high protection combined with long shelf-life, and Atlantis-Pak is determined to ensure that all of its products are recyclable.

Although a relatively small part of the overall operation, the label production department at Atlantis-Pak is growing fast.  As noted previously in Russia the uptake of digital print technology has been slower than elsewhere, and for the foreseeable future this is likely to apply to Atlantis-Pak too.  For now, the all-round capability of the Mark Andy Performance Series is best suited to their market.